It didn’t took very long for the Arcturians to come up with a solid confirmation of the ascension scenario around Winter Solstice which I shared with you in several articles this month.

I knew it and I expected it as I was in constant telepathic contact with my brethren from Arcturus, where a soul fragment of mine dwells in the 9th dimension and urged them to bring additional clarity to me and my readers.

Today, they announced the upcoming mass awakenings of humanity after I explained to you in detail the energetic processes leading to this evolutionary leap of mankind, which I have heralded to humanity more than 2 decades ago.

END_OF_DOCUMENT_TOKEN_TO_BE_REPLACED

The Most Revealing Interview an US President Has Ever Given

If you have any doubt that the old matrix is now crumbling big time, watch this interview with Trump on Fox News, the same TV sender he already decried as “unwatchable”.

Just consider for a moment, the President of the USA, allegedly the most powerful man on this planet:

1. Complains that his country is not a democracy but a banana republic where elections are being rigged on a massive scale and all the state apparatus seems to participate in this gargantuan crime against him and the will of the people.

2. The US judges and courts are corrupt and not only reject to see the ubiquitous evidence of massive election fraud but also decide to delete this evidence.

3. The national institutions, such as the FBI and DoJ whose duty is to investigate such crimes, are so corrupt that “they are missing in action” and accept willingly this fraud while preparing for the new fake president as they have slavishly always done in the past.

END_OF_DOCUMENT_TOKEN_TO_BE_REPLACED

This will be a very complex and composite disquisition as it involves many pieces of the current ascension puzzle. The good news is that I have discussed all these pieces in my previous articles and energy reports. This would say that you have to carefully re-read all the references I will mention in this article in order to understand what will happen when the global shift will arrive – most probably at the end of this year – and will change humanity and this planet forever. My key point of departure is that everything that will happen has already happened and has been experienced by us.

I have proved in the last several months in daily retrospective reports that we accomplished the first planetary ascension already on May 28, 2014, and since then many more times. Now we are preparing the ascension of the final batch of timelines with the current last soul fragment of ours that is still incarnated in a physical vessel. All our other soul fragments have already ascended and exist on the new Gaia-5.

The same is true for our individual ascension. Both Amora and I transfigured our carbon-based bodies into crystalline light bodies in August 2013 and then ascended one more time officially and became Logos Gods in December 2013 in Lofer, Austria.

I can only speak of ourselves and each one of you must find out in an intimate dialogue with your soul where you stand in the LBP and the ascension process in order to have a better idea of what to expect during the impending global shift.

This article will help you do precisely that.

END_OF_DOCUMENT_TOKEN_TO_BE_REPLACED

Years ago I wrote that the final phase in the ascension process leading to a global shift and our final personal transfiguration will be characterized by an “escalation of confrontation between the forces of light and that of darkness leading to the final resolution – the Ascension“. We are now exactly in this final period.

There is one immutable truth from which we should depart when analyzing the current situation. The party of lies, deceptions, oppression, in other words of darkness, that has reigned for eons of time on this planet will be defeated once and for all in this final phase.

With regard to the US election, this is the party of the un-“democrats” and their kleptocratic candidate Biden. As this party is fully involved in the machinations of the globalist cabal, this also involves the dark politicians in all other countries who have already congratulated Biden as the new president because he comes from the same pig stall. They are so much in a hurry to get rid of this trouble-maker Trump that they do not realize how easily they reveal their true evil nature.

The rigging of the US election with the help of Dominion voting machines involves the rigging of numerous such elections in many other countries so that it has already expanded to a global scandal as the press conference of Trump’s lawyers clearly revealed.

END_OF_DOCUMENT_TOKEN_TO_BE_REPLACED

We are almost 2 weeks in the aftermath of the most fraudulent election in the history of the USA and my forecasts have already been brilliantly confirmed:

We have all three alternatives that I outlined one day prior to the election playing out at the same time, which is what the true simultaneity of the higher realms is all about. At some point, there will be a divergence and one alternative will prevail. This will depend on what we want to experience.

The reason for my forecast’s precision is that we are co-creating in a very powerful manner this reality and the timelines we want to ascend with us when the shift will come while supporting the aspirations of the awakening people to finally learn the truth about their interminable enslavement due to abysmal blindness in this most savage incarnation experiment in this multiverse.

This weekend, the US capital witnessed the biggest peaceful demonstration in its history against the election steal and power grab of the deep state and its minion – the corrupt and senile kleptocrat Biden. The American people are beginning to awaken, although this is not the beginning of the second American revolution and the revival of the republic as Alex Jones erroneously claimed in his speech in Washington DC in total negligence of his spiritual intuition, which he has sacrificed a long time ago on the altar of political divisiveness, but the beginning of the liberation of the human race from this prison-planet Earth that has lasted eons of time.

END_OF_DOCUMENT_TOKEN_TO_BE_REPLACED

I follow Brad Johnson for a long time. He lives in Vancouver. I never really resonated with him for a variety of reasons. Here he has done a very comprehensive live channeling on what will happen end of December and then throughout 2021.

Much of what he says makes a lot of sense and coalesces with my predictions. I would say that I resonate up to three-quarters with his message. What he has totally left out is the ascension scenario where humanity has chosen to experience a world spiritual leader on the most advanced ascending timelines as I informed you already on February 15, 2020.

The future transformation of humanity will depend mostly on how it will respond to the introduction of the new Theory and Gnosis of the Universal Law and not so much on how it will react to the inevitable collapses of the old structures. For obvious reasons, Brad Johnson has no knowledge of the Universal Law and does not deal with this key aspect of the upcoming energetic shift, although I made him once aware of its existence and the sweeping ramifications it will have for the future of the ascending humanity. But he is not a scientist and cannot understand it.

The ascension scenario where humanity will experience the appearance of a world spiritual leader is now even more valid than 9 months ago when I first presented it to you. I would say that this scenario is currently in a very advanced stage, it is so to say, pregnant and can give birth anytime sooner.

I decided to publish this video contrary to my usual reluctance to post other channelers in order for you to watch it with a lot of discernment and decide for yourself whether you resonate with this forecast and find out where you stand currently with your personal preparation regarding the sweeping changes that will undoubtedly arrive this and next year one way or another. 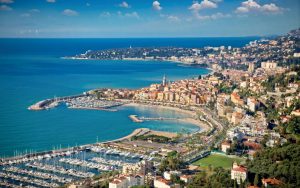