Brad’s Comments on My Article “Chronicle of a Death Foretold“

You have just provided the perfect combination of concepts to be in the Now zone which is the US debt markets and comparison of market reactions of 2011 and 2015.   The main point of seeing the chart of the S&P 500 play out the exact same pattern is to highlight that we are basically reliving, in many ways, 2011.  I told many people this would take place, but to see the charts come out this close is very strange indeed.

In 2011, the US bond market broke in several ways.  At that time, you could not fully implicate all areas of the government for being part of the fraud and in that statement I am referring to almost all governments of the Western hemisphere and as well as European stooges.  Some of the money out of the initial QE efforts engaged in the 2008 shakedown train robbery went to actual investment concepts of a traditional nature as money flowed into the typical business cycle starting real assets.  In a sane world of business, these would typically lead to a new cycle of profits that would generate business revenue to tax as well as more employed people to tax so that bailouts could be paid back and the investment be worthwhile.

You can see how well real concepts worked up until 2010 by looking at all real asset classes like copper, iron ore, steel, etc. as well as the activity taken up through epic debt in China. At least China built something, whereas the US has so much graft on top of anything it does now that it’s tough to tell how much of that money even went into the economy.

As that initial injection wore off, the markets started to roll over and had nothing to feed the beast.  That is when the Flash Crash of 2010 occurred which truly began to show how much the computers had infiltrated the markets.  Fittingly, it was on my birthday. I watched it real time and it was spectacular.  Some stocks dropped from $55 to a penny in split seconds.  Like most everything, it was most likely mostly a massive theft that stole billions of dollars of stocks from people who use stops to sell their shares.

2010 is also when the math truly began to add up that nothing was going to be able to work on this path as the debt load was too heavy and nothing they could try would ever save this system except some sort of massive debt reset or forgiveness.  When that happens, a logical thinker should be saying OK, the reflation isn’t working and we have a massive problem.  Also, the function of the system is rotten to the core.  This was the next moment where someone should have gotten out of the car and fixed the three flat tires on a four tire vehicle instead of hitting the gas pedal again.  I took the hint to find everyone in the world who knew what they were talking about and had amazing track records.

In 2011, the numbers no longer added up and S&P did the right thing and downgraded the US debt.  This is even with the rigged accounting changes done in 2009 to the FASB accounting standards.  Even the rigged, rigged numbers weren’t good enough to cut it. Markets were in complete turmoil.  Gold and silver were wreaking havoc on people’s perception and there was definitely fear in the air.  This is the moment the Death Star blew up the first time and every last ounce of logic and reason left the system.

The issues confronting the US debt market that are all of sudden surprising everyone already happened in 2011 but no one responded.  The spoofing, algorithmic programs had been allowed into the market full force and this is when they really began to be used to create the haze of perception.  Every single financial advisor in the world with any fiduciary duty for human beings who cared for the truth that came out of their mouths should have recommended that everyone disengage this system because it has to blow or be reset.

The massive spike in August of 2011 is when the US was downgraded.  The US later fined S&P $2 billion for its insolence in actually warning people that there was an accounting issue.  This picture shows prices going up in bonds which means the yield on the debt was forced lower.  Spoofing computers that removed their orders is what helped trigger this directional move.  This means that the US was downgraded as it should have been but then massive amounts of money flowed into US Treasuries as an investment which typically is done for safety and yield.  This is where the bifurcation between paper and reality went gonzo and it has been a long four years since.

This is where the credibility trap of the whole system started engulfing everyone and whistleblowers were getting taken out.  The governments were now fully hand in hand with the criminals that perpetrated the crimes and every move has been made to defend it since.

Most people remember all the bankers that died in the two years after this time.  Here’s what happened to the one mainstream guy to tell the truth about the status of the balance sheets in the oil and energy markets.

There is one fundamental problem in all debt markets that has been ignored by people desperate to keep the game going and pay the bills.  Yield on a product should represent a fair return of interest for borrowing your capital in relation to the risk you are taking. With the fraud trying to bend the rules of accounting into a zero gravity vortex of nonexistence, there is no ability to measure risk.

I think the only decent balance sheet left in the world of substantial size is Russia.  Some of these governments should be paying anywhere from 25-75% on their bonds to engage the risk that is truly being undertaken and that includes the United States. By suppressing gold and turning off all of the alarms, these governments are being allowed to confiscate the assets of the people in discreet fashion to pay back debts that can’t be paid at rates much lower than logically should be possible. The transmission system banks also get rewarded with the arbitrage of being able to borrow at near zero rates and then use the money worldwide to the best spot that capital can get a return.

Not paying an interest rate on people’s savings is one of the biggest secret bailouts ever undertaken and most people don’t understand, this is why the real estate market has skyrocketed so much.  By fixing up your house, you are just fixing the banks balance sheet right now, but all that is just part of the bigger Ponzi anyway.

The banks have taken this money from the few years of additional printed money since 2011 and mainly bought bonds from the governments to keep the Ponzi going.  This is why the governments have basically turned into asset stripping mob organizations instead of actually doing something for the people.  The case of Greece is the most visible example of collection being forced on the population, but it’s happening everywhere.  This is why the velocity of money is the lowest it has ever been and rigged statistics keep being used to make it look like inflation isn’t affecting your purchasing power. 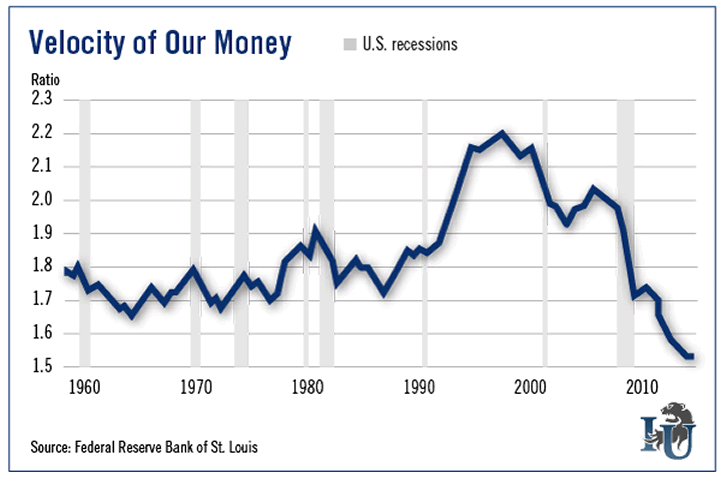 The amount of derivative products that can be used to accentuate gains on bonds while basically not investing in anything productive at all are too many to describe.

Since the governments can’t pay their bills and no one knows truly what to invest in besides human enslaving concepts, the main source of making money for the big boys is by bending all laws of reality in the bond market and continuing to make money off of them by forcing bond prices up which means interest rates come down.

That has been the motivation, but the only way the game can continue now is to print more money as the tax collection business is going into the dumps with the global depression rearing its ugly head again.

As I said before, the events of last weekend, the markets aren’t responded to talk anymore as the juice has run out again even with Europe and Japan still in full print mode.  The time for talk is over.

Dark energy is always on the move and it is now leaving the worst of the worst of the population in visible positions as it’s time to burn down the restaurant.  The broken balance sheets have now been levered up into states beyond description and are about to be dumped on the people and is most likely the reason that we are seeing the signals that are coming across.  They allowed the computers into the bond market as well to steer the herds and that error showed up in the bond market flash crash in October of 2014.   With the brutal laws trying to be enacted with the TPP, the fraud is now trying to bypass the ability of a country to confront the global corporations.  The governments are being left behind as the masses are bankrupted.

Is it safer now to own government bonds or to invest in the very corporations that are being supported to help script the new order?  This is why the markets act as they do and money flows tell the tale. 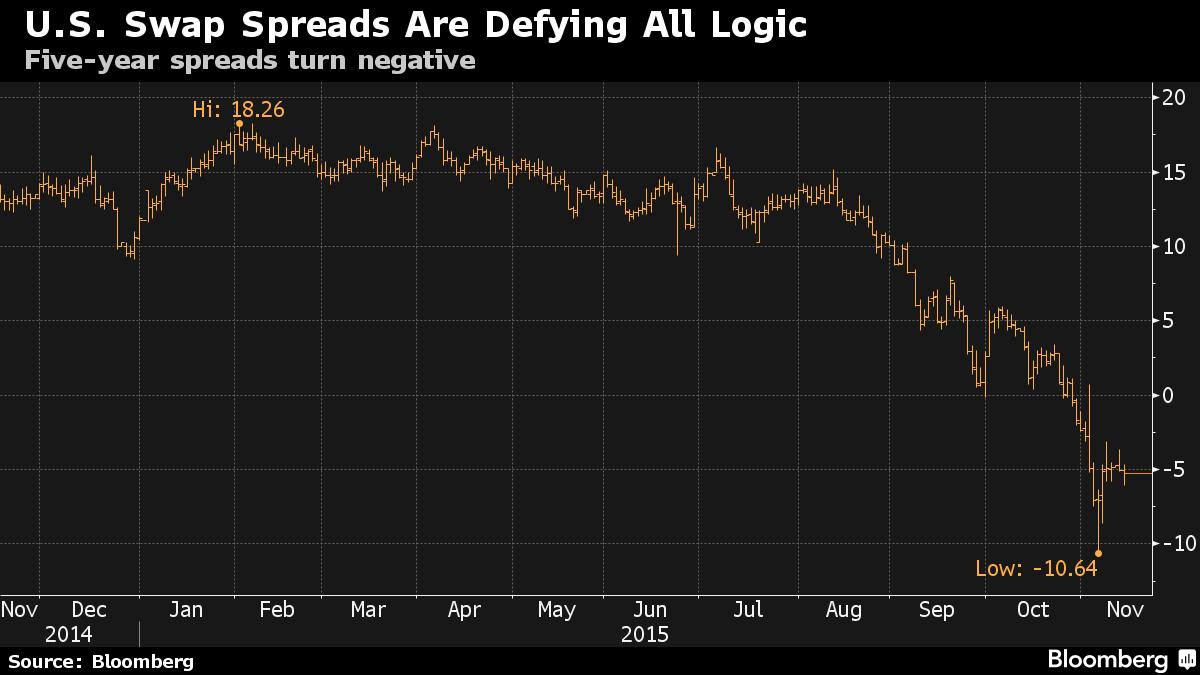 I tried to tell everyone in 2011 that your own money was going to be used to invest in your own demise.  I think it was Huey Newton who once said, “You can never be too radical when you are right.”

I’m sure a few people noticed today (Nov 16) that the markets rallied back up almost 2 1/2% off the overnight lows after Japan announced its fifth recession in five years, the attacks in Paris, and absolutely horrific manufacturing numbers out of the US as individual retailers march out one after another and blame warm weather on their terrible numbers.  The next few days will tell the tale of if a bounce can be procured again as they want for bonus time or if reality can finally begin to take place.  December is a delivery month for the Comex gold market and the numbers say this can’t hold up any longer.

It’s a fitting debt bubble end that metaphorically represents the cycle of karma here so well.

I finally saw a huge sign I was looking for. This article was posted on Friday.  Look how the headline is worded.

Every cycle like this with dark failing has the phase where the “people” or the “non-believers” get blamed and this is the most dangerous phase of all.  There were several articles like this blaming the people for the obvious trainwreck of Abenomics in Japan as well.  This is the stage where Nazi’s were hanging people in the streets who didn’t believe as it was obvious the Reich had been defeated.

The one area I can’t get a great read on is what exactly the Chinese are up to and how much the Western financial wizardry is behind what’s happening there.  Obviously a few different factions have their intent and are trying to make it turn out in their favor.  Unfortunately, that favor usually doesn’t include you and I.  Fortunately, there is no reason left to relate to anyone’s favor.

Every person I know is responding differently now than in 2011.  All are saying they can see what I’m talking about now, but the main comment is the bridge may just be a little too far to cross.  They are about to see that they might want to pick up the pace a little bit.