Our first most prominent creation immediately after my arrival in Vancouver, Canada was the Infinity Portal in White Rock, situated only a few miles away from the US-border and in close proximity to Vancouver Island, the remnant of Lemuria, and Mount Baker, Washington, USA, where the Lemurians (Agarthans) have their portal and have met with Amora on a few occasions. 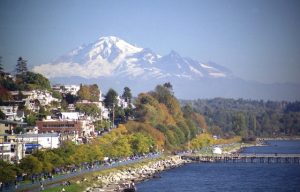 From its inception, the Infinity Portal became a coveted target for the dark ugly, evilest reptilians and other dark entities from the astral plane. In their message below the Elohim explain why this was the case and this discussion is valid for all these years until we finally eliminated on June 10th, 2020 these evilest ET’s race in this universe that has enslaved humanity for eons of time from the earth.

Less than a month and a half after my arrival, we were confronted with a very serious attack on a friend of ours who participated in the Divine Trinity and thus in the co-creation of the Infinity Portal. This person was approached and then brutally harassed by a reptilian shape-shifter who was using predominantly crude but very powerful sexual energies for his approaching. His goal was the disruption of the Divine Trinity and the hijacking of the Infinity Portal.

Amora and I, however, immediately recognized the danger but then needed all our persuasiveness to convince our friend about this imminent danger. In the end, our friend recognized the great peril and we could save the Infinity Portal from this attack and breathe out deeply in relief.

In their message below, the Elohim comment on this incident and also muse in principle on the misuse of sexual energies by the dark ones to mire the light warriors quite successfully and derail them from their path of the light. Essentially, the Elohim explain why the new age movement failed since its beginnings in the ’60s – a historical fact which I have discussed on numerous occasions in the past.

This message is pivotal for your understanding as to why the ascension process was fraught with so many delays and changes in the scenario and why there had to be so many new ad hoc resolutions of our Elohim souls at multiple higher dimensional levels in order to overcome these hindrances and challenges and still guarantee its success.

Exactly this unique light work of our souls was in the centre of a previous message of the Elohim, where they refer to me as the “Prime Communicator” who is enlightening the universal spiritual hierarchy on how the ascension of this most toxic and problematic planet and incarnation experiment in this multiverse can be successfully accomplished against all odds:

Ascending Gaia as Logos Gods – Part 7: The Elohim Speak About Georgi’s Role as “Prime Communicator” Enlightening the Spiritual Hierarchy of This Universe on How the Most Difficult Ascension of the Earth Is Successfully Accomplished

And here is the message of the Elohim on our successful rescue operation of the Infinity Portal in White Rock end of March 2014 from an imminent and very insidious attack of the Reptilians to hijack it and misuse it for their nefarious purposes.

March 27, 2014,  The Elohim on Our Rescue Operation of the Infinity Portal in White Rock

Amora: Here is a message from the Elohim that I received after several exciting events took place, including a visit from members of the mothership of the Galactic Federation of Light, who told me we would be receiving adjustments to our light bodies during the nighttime sleep. I was told that we would be returning to a new timeline upon our return after the completion of the adjustments.

This night, you also had a dream that confirmed my message, that we were given a new “package”/ a “marriage package”, that included a new energetic package and timeline.

Our meeting with our close intuitive friend confirmed that you are eliminating implants in humanity that prohibit thinking in Truth within the entire collective. This is represented by a fifth chakra plug. You are also assisting humanity to remove streamlines, or negative vortices, from within the third chakras of the collective, as another soul mission you have taken on from old past incarnations.

“We are the Elohim and we attend in this moment to discuss recent issues that have arisen within your immediate reality.

There have been many circumstances playing out around you, flowing in and out of different timelines, and dancing the dance with the “falling away” paradigm, the third dimension.

Various interactions have necessitated a new focus, a concerted clearing from your fields, over the recent time frame you sense as 1 – 2 months.

Many energies follow the light and most, if not all of these energies, have been sent to you from the other expression of All-That-Is, the competing (dark) faction.

The use of sexual energy is a powerful tool and has even duped the greatest of men, where this propensity lies within their own natural field. The process of the introduction or the meeting of one may seem innocent at first, on the surface, and then the manipulation through the realm of sexuality-based centres opens your soul to great vulnerabilities.

Some Beings thrive on the attachment, the game of the lure, and become thoroughly and fully energized for life when the entrapment succeeds.

After this moment, this success, it indeed takes great discernment, great energy and a deep resolve to dissolve these kinds of attachments. The mind alone is not your complete ally in this instance, so you must do your utmost to use all possible means and tactics at your disposal to fully comprehend this level of engagement, while at the same time remaining vigilant, before the connections are made firm.

The infinity portal (in White Rock) is the most highly coveted portal here, now. Beings of all persuasions regard it now as a creation of God’s perfection, where any light gestalt may enter it and receive an immediate connection to the Source, lifting any and all limitations upon their Being.

It is important to note that entities of the Reptilian group will often use sexual energy to hijack your soul, and therefore your mission, and are more often than not successful in this realm, and this is in large part one main reason why the light warriors of your day have not succeeded in their overall mission of the ascension.

The energies of sexual derivation began in earnest in your early 1960’s, during the time called the “Beatnik movement”, and were promoted in advance of the Harmonic Convergence of the mid-1980’s (1987).  It was the establishment of these energies that drew one into the lower chakras, away from the development of the upper three-four chakras, those that connect one to one’s sacred I AM Presence and therefore to the source of All-That-Is, itself.

This state is not meant to include the sacred sexual connection that arises from the Divine Union, as this arises from a completely sacred source and is of the natural order.”

Background, George, April 30, 2014:  We were helped by the Agarthans and AA Michael in this important battle, to hold this portal in the hands of the Light, because there was much at stake for the whole ascension process as the Elohim explain in their message above.

Most probably the Agarthans will use this Infinity Portal to enter from the Inner Earth the surface of the new earth during the MPR. It is important to observe that there are only three such Infinity Portals on Gaia, the said one, the Infinity Portal in Munich, Bavaria, where I lived and created, and a third one in Istanbul, Turkey, which I have opened during my sojourn in Bulgaria, on the Black sea coast, not far away from the Turkish capital and later on fully activated by Carla during her visit in Istanbul at the beginning of June last year (2013), when she visited me in Germany. This light work has been extensively reported on my website.

Since the opening of the grand cross alignment portal on the 26th of April, 2014, all three Infinity Portals are fully activated (100%). This led to the simultaneous activation of all 144 000 ascension portals around the globe in preparation for the final ascension of Gaia and humanity. This number appears in the bible and in many esoteric sources but has been wrongly interpreted so far.

(On August 3rd, 2017, we participated in the Great Gathering of the 144,00 warrior souls during the Oversoul Gateway when we encountered the Great Crystalline Beings of light and Babaji, again in White Rock and reported on this event:

The dark ones have carried out regular attacks on the Infinity Portal in White Rock for several years and were very adamant to gain control of it for all the access it would have given them to higher dimensions. This attack had to be stopped by all means, and I used my power as Logos-God to purge this dark reptilian shape-shifter and completely neutralize the situation.