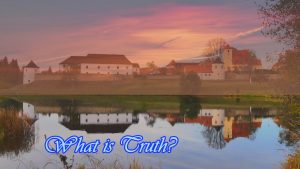 This famous question, which Pontius Pilate is said to have addressed to Jesus in the New Testament, has deeply moved philosophers, theologians, lawyers, carpenters, butchers and shepherds at all times. One of the reasons for this is that truth always has a strong connection to justice, which people intimately desire. An online search on the internet bears eloquent witness to this. In their search, the questioners always start from their personal point of view and accordingly give many different answers that stand side by side, overlap or partially exclude each other. We leave it to the reader to form his own opinion. He could start with the corresponding Wikipedia articles.

The concept of truth is used in different contexts and is formulated differently. In most cases the agreement of statements or judgments with (supposed) facts, (alleged) virtualities or (so-called) reality is called truth in the sense of (hopefully) correct reproduction. ”Truth” is also understood to mean the agreement of an utterance with an intention or a certain meaning or a view described as ‘correct’ or with one’s own knowledge, experience and convictions; one also speaks of ‘truthfulness’ here. Deeper considerations see truth as the result of a supposedly revealing, uncovering or discovering process of recognizing original connections or essential traits. (strongly modified according to German Wikipedia).

The underlying adjective ”true” can also describe the genuineness, correctness, purity or authenticity of a thing, action or person, measured by a certain term (e.g. a ”true” friend). In everyday language, the so-called truth is distinguished from the lie as an intentional or unintentional, unconscious utterance of untruth.

The question of truth belongs to the central problems of philosophy and is defined differently therein (see below). Mathematics is about provability, which should lead to truth, but which always exists only in the head of the mathematician, because mathematics is a hermeneutic discipline lacking a concrete object of investigation in the nature of space-time. In natural science and technology, truth (true value) is basically achieved by measuring.

All these answers are based – without this being addressed – on the world view of the questioners. And this generally assumes that truth exists and is visible in our perceivable world. A fact is then described as true if it fits into this world view. Here one tacitly assumes a consensual interpretation: ”The world truly exists as it is perceived by the vast majority of people”. These ”facts”, ”realities”, ”proofs” and ”measurements” are not doubted.

The only problem is that man does not perceive the world as it is. His five senses as well as the measuring arrangements of the scientists do not determine hard facts of an actual reality, but always only interpretations of something of which they have no idea. In other words: man determines infinite amounts of details of an illusion (Maya), which presents itself to him as space-time. All the details he gives are only names. Although these are useful for survival or, in the form of technology, also for comfort, they have nothing to do with truth.

Therefore, any further penetration into the many facets of the comparisons between statements and their relevance in relation to a so-called reality becomes a farce. The human perception is so inadequate and incomplete that even statements in court become worthless because each of the participants has a different view of things, has perceived different details and has hidden others. That is why it is never about justice in court, as many people still believe, but only about whether the confusing laws are ”correctly” taken into account.

I don’t even want to talk about the physicists who got lost in the apparent contradictions of quantum mechanics, for example. There can be no question of correct ‘perception’ here. How are these poor beings supposed to publish truthfully? An impossible undertaking. As a rule, they measure and calculate quite correctly, but the interpretations have nothing to do with the truth, because they do not know what lies behind their formulas. The famous Nobel Prize winner Robert B. Laughlin said: ”The Big Bang is just marketing”.

Read also: Open Letter to All Scientists on This Planet – Accept the Universal Law or Vanish

The question: ”What is truth?” is therefore inseparably connected with our limited perception/ worldview. As long as we are trapped in time and space, i.e. in the 3D matrix, we can confidently forget the subject of truth. Even if we go a little further into 4D and include the emotional realm, the whole thing doesn’t get any better, because feelings are so unreliable and changeable that, as a source of knowledge for truth, they can’t overcome man’s illusion, even if feelings lead to more satisfaction in personal life at times, because a situation has been better assessed emotionally. We are dealing here with procedures, which elude any truthful reasoning.

We live on the learning planet Earth in a situation in which we are deliberately cut off from knowing the truth so that we can have certain experiences. Our Higher Self, our soul, has more or less voluntarily agreed to these incarnations. The way we feel the world materially enables us to have infinite positive and negative experiences. We are cut off from the knowledge and wisdom of the soul at first, yes we have the frightening feeling of being lone fighters most of the time and we should admit that our decisions in this state have nothing to do with truth, at best with expediency. And this is basically also illusion, because always a large number of different possibilities are open and are carried out on different frequency levels, so that decisions based on ”true” knowledge are also illusory and thus play no role, because all possibilities are played out anyway at the soul level, no matter how we decide as incarnated personalities.

It is the game of infinite possibilities that we can play so excellently only because as personalities without the certainty of the soul we can never make any true decisions or, formulated more correctly, because all decisions are equally valid. Finally, on one of the many frequencies/ timelines/ experience worlds, we come to the realization that we are not alone but have a companion – the soul. And from then on we are not very far from the realization that we are this soul and have only put on a physical body along with its feelings and lower false thinking. This false thinking is nothing more than our limited imaginative thinking that leads to the interpretations which scientists then think are “true facts”.

The question now arises whether the soul on 5D – our I AM Presence – knows the truth and if so, how it benefits the personality of mature and old souls by soothing or ”shortening” the sometimes very painful path of incarnation. I cannot conclusively answer the first question, but I assume that the realization of the truth of All-THAT-IS is still incomplete for the soul, even if it is extremely expanded in comparison to the knowledge and the possibilities of realization of the incarnated personality.

In the Theosophical taxonomy of man’s constitution the soul is given the term Buddhi = wisdom, its outstanding ability is discernment. She knows unmistakably what is right for the corresponding physical person in every situation – taking into account all the innumerable eventualities in the many incarnations.

The second question about the connection between soul and personality is easy to answer: The voice with which the soul speaks to the personality is, above all, intuition. Only if it is not heard, does the soul resort to violent methods, e.g. in the context of illnesses and strokes of fate. Intuition is the source of truth for the personality of the incarnated personality. Depending on how far a person opens himself to this source, the more he/she can live in the light of truth. Everything else is illusion, no matter how much it is veiled by philosophical jargon or by formulas as complex as they may be. Therefore, you can confidently spare yourselves the numerous ”philosophical” articles on the internet.

How does a person recognize whether an inner impulse comes from the soul? We give you the following catalogue on the way:

1) The solutions of the intuition are mostly rather unusual and therefore surprising. The fellow human beings react astonished to angry, if you go the indicated way, because it does not correspond to their materialistic world view and experience, which is everything they know.

2) The advice of the soul often contradicts the so-called ”common sense” or what you and your environment consider to be reasonable, useful or practical.

3) Mostly it is not visible at first why you should follow this advice and, above all, which consequences it has in the long run. Openness and trust are in demand – these grow with experience, because you realize that the soul guides you on a meaningful course.

4) Finally, a very touching relationship of trust with the soul evolves, you realize that you are actually the soul and decide to live as a soul.

5) Thus you will enter all the faster the soul consciousness – the I AM Presence – if you trustingly realize that nothing can really happen to you. The soul is always fully aware of its everlasting embedding in All-THAT-IS and knows that it itself creates its many worlds of experience in 3D/4D – not to perish, but to become rich in experience, in will, love and intelligence.

When I finally ask the question: ”What is truth?”, then the answer can only be as simple as that: Man’s truth is his essence, his God’s spark, his I AM Presence, his soul, his Higher Self, his divine discernment. All other so-called truths remain illusions as long as they do not rise above the lowlands of 3D/4D.

In our present 3D ”reality” there is no truth but instead different degrees of untruth (lies). We are currently living in the final stages of the age called ”Kali-Yuga” in the Hindu philosophy of the Vedas. This epoch is characterized by lies and deception. Using conventional methods to find the truth in it is more difficult than to find the proverbial needle in the haystack. Basically, truth simply does not exist, but is always regarded by the rulers as their supposed privilege and is thus the basis of their abuse of power.

If you check in Wikipedia all the different kinds of truth that are supposed to exist, you will quickly realize that these highly intellectual outpourings are always only imaginary projections that have no relation to people’s life situations or help them in any way with their decisions. It is basically a ”mental onanism in vacuum”. It is about distraction from intuition, which – initially hidden – is potentially available to every human being. Basically, such useless definitions only hinder the finding of truth, because they only cause confusion. The powers in the background rub their hands and look mockingly at their lackeys, who only strengthen their petty ego with such empty mental games (e.g. as academic publications on truth), which cut them off from intuition. This is how life is in 3D Kali Yuga.

The human higher mind (pure reason, logic), however, interprets this opportunity as a challenge as to unravel the Gordian knot and to victoriously penetrate the knowledge and wisdom of its essence – the soul. Man thus leaves the old world behind himself and ascends with his expanded consciousness into the Eleusinian realms of 5D. There, he enjoys outside of lies and deception, without duality/polarity in a unity field of love, understanding and togetherness new challenges, unknown worlds and delightful other beings that open up to him in the infinite cosmos.

Of course, these souls can – if they wish, or because the task is included in their structure – also temporarily bilocate into the upper 4D realms as ascended masters in their light body to offer encouragement and help to their brothers and sisters there, so that they too can live their soul essence to the full. That is truth.