Yesterday, was one of the most amazing days we have had in a long time. I had just recovered from my two weeks cleansing of whole Europe and North America in order to prepare the ground for the opening of the Rainbow Gateway on July 27th during the full moon eclipse. This exhausting cleansing activity was retrospectively confirmed by the Elohim who apologized for all the pain I had to endure. With its opening, the new magnetic circular rainbow energies arrived on the new 4D and 5D earth as announced the same day by Astraea et Amora, our HS, and the very high vibrating Crystalline Beings of the Rainbow Rays in two messages to Carla.

With their arrival I was assured that my pain will begin to subside as these intelligent circular rainbow waves of highly purified magnetism cleanse the human chakras and dross automatically, now that they have been downloaded from the Source. This would say that my unique honeycomb energetic field, which the Elohim told us is one of its kind in the entire multiverse and created explicitly by my soul for my current mission as the nexus to the Source and the chief cleanser of human dross, will no longer be exploited to the same extent and I can hope to experience more calm final days before my ultimate transfiguration and ascension. This explanation succinctly sums up my daily crucifixion for humanity in the last two decades of most intense and debilitating light work.

That being said, let us see what happened on this auspicious day of July 30th. In the evening, at sunset, we witnessed from our southern balcony a gold-pink cloud above the hills to the east where we had activated the city of light New Raetia, and in particular the new world healing centre on June 20th, as reported in our article “A sacred Land“. This happened one day before we opened the summer solstice portal when time and earth stood still and the final separation of the ascending 5D Gaia from the old 3D matrix occurred.

Since then we have ascended to a 5D platform which then made another major ascension leap to 7D on July 21st after we observed the arrival of the Sacred Fire on July 18th. I was not able to report about this shift of our city of light (our ascension platform) to 7D because I was hit so hard by cc-waves for more than two weeks in a row that I was not capable of doing anything meaningful at that time and only hoped to survive this energetic onslaught. Carla got an oral message from the Elohim that I replaced the old city X, where we now live, during my visit to its centre on Saturday, the 21st of July, to do some chores with the new ascended city Y.

This was a play upon words which referred to our knowledge that Italy is the Alpha and Omega of all human creations on this planet and that it is from here that the new revolution of humanity will begin this year. That is why we are here – we are the midwives of this magnificent birthing of the new earth.

Please observe the strict chronology of our experiences and reported events in real time during the ongoing ascension process of Gaia which has acquired a breathtaking speed in the last days and weeks. This is unique in the entire esoteric literature and this shows you who is really involved in a direct manner in the creation of the ascension process of Gaia and who is only surfing on astronomical events and sucks its fake ascension news from the tips of his fingers as most wish-to-be New Age Gurus do to the very last moment. They are now desperately engaged in a terminal psychological indulging of their waning human egos that are dissolving under the barrage of the new magnetic circular rainbow energies. And this is really a very good news as I am, honestly, dismayed by all these Liza Nuisance Browns with their PADS (post-menopausal ascension derangement syndrome). Sometimes I wished I would not have announced ascension 20 years ago.

Anyway, when we witnessed this gold-pink cloud above our sacred land where the new healing centre is waiting its manifestation, Daniela was quick enough to make some photos. 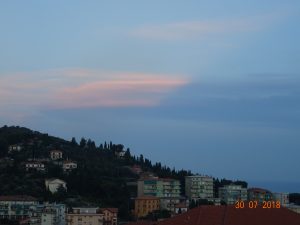 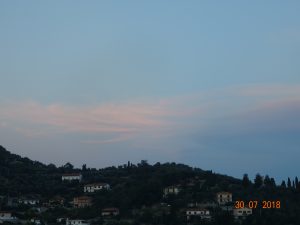 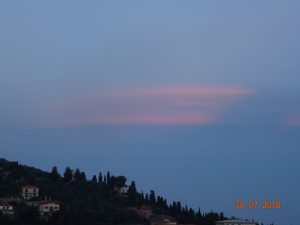 While Daniela was taking these photos she received telepathic information from this space-ship that was camouflaged as a cloud. I asked her to write immediately down what she heard as not to forget it. Here is her report:

“I was on the balcony facing the sea and I photographed this incredible cloud, I immediately felt that it was a spaceship, not as huge as the one that usually stands above, but still very large.

I heard that it was not the complete Galactic Federation, but part of it. They were a delegation from Andromeda and Arcturius coming together for the first time in a very long time. They told me that they are engineers and are working with the element of water and with the magnetic energy that has just arrived.

Then I saw how the water solidified due to the magnetic base and it is this solidified water, transparent as the ice that becomes the basis of the new crystalline constructions of the city of light. It is different from ice, its chemical composition is not even that of water H2O, but I could not see the new formula.

Astraea et Amora have defined this new form of water as “airborne water“, in a futile effort to use limited human words to explain the new 5D forms of energies and their completely different quantum-energetic structure based on pure magnetism and superconductivity. This is where present-day physics has to surrender and acknowledge its total ignorance. But these new forms of energy are still within the new Axiomatics and Theory of the Universal Law as they can be derived from the primary term of human consciousness which is energy = All-That-Is. That is why the new theory of the Universal Law is of transcendental nature as it transcends this reality and is also valid in the higher dimensions. After all, it comes from the Source and I am only the harbinger of this theory in human language.

Daniela’s message from the spaceship of the Arcturians and the Andromedans is extremely important as it sheds some light as to how creation in 5D works. It fits very well into what I know intuitively and with respect to the new physics of the Universal Law. Here is my succinct  version. The new magnetic rainbow energies, which are highly intelligent energies, have the quality to form all possible shapes and forms as quantum energetic fields, as solitons or standing waves. These energies are susceptible to human thoughts – to spirit – and build the quantum foundation for any creation of form in 5D. Then these, so to say, still empty quantum fields can be very easily filled in with new airborne water which was mentioned in Carla’s two messages, but which is different from the H2O water on this planet. It is rather a kind of a primary energy = fluid crystalline matter that can take any shape and form and solidify into firm crystalline structures that build the city of light. These structures are though malleable and they can be changed anytime through our thoughts in the above mentioned way. This is how immediate creation happens in 5D as presented in the simplest possible form.

After Daniela made these photos Carla had the ingenious idea to make two photos with her iphone directly from Daniela’s photos on her iphone and this is what we saw. These were jaw-dropping pictures – the magnetic circular rainbow waves in their perfect geometric structure underlying the foundation of the new city of light, high above in the sky and expanding into the Infinity Portal, were revealed to us in their full magic: 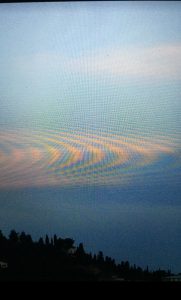 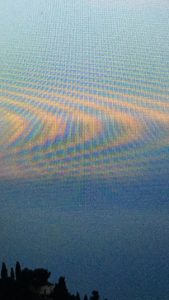 I hope you enjoy these amazing pictures and envision the incredible light work that is being done in Northern Italy – by us on the ground and by all forces of light from the higher dimensions. The manifestations of this light work have commenced and it is our obligation to share it with all other people.

And here two more pictures taken this evening after sunset which display similar patterns as observed in the past in conjunction with the city of light here in Northern Italy. 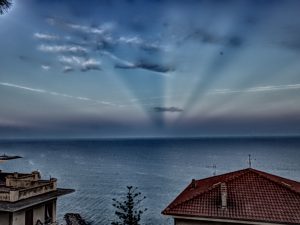 This time a view to the south in direction of Africa, which shows that the city of light is now everywhere. 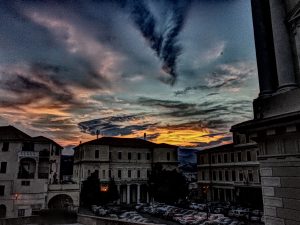 View to the north – northwest. Watch the V-cloud for Victory which AA Michael created for us as we are celebrating today our victory over darkness.