I am publishing this article one more time as it was censored by the cabals internet thought police (see below) which is the peak of human irony as I only quote official sources and facts. This tells you how desperate the losing dark cabal is now and why our ascension is a done deal. – George

A Vivisection of the Schizophrenia in Obfuscated Medical Science

We are already in the second half of May and the facade of the coronavirus “scamdemic” is beginning to crumble big time. Thanks to our light work as I have repeatedly stated in all my articles dedicated to this latest and last attempt of the dark ruling cabal to prevent the inevitable – the ascension of Gaia and humanity to the 5th dimension, beginning with me as the world spiritual leader:

We are now writing the playwright of the ascension scenario and our roles as the main protagonists in this unique drama. Who else is capable of having a congruent vision about the future of humanity except us? Look at the cacophony on the world stage where even the few renowned alternative thinkers have fallen prey to the deliberate obfuscation of science – medicine and mathematics as fake epidemiological statistics – and have lost the direction. This is because the entire humanity has no clue about true science and can be mired ad libitum by the usual dark perpetrators of all evil deeds on this planet.

I have always expressed the opinion that humans are the most dumbed-down sentient race in this multiverse and the express willingness with which the vast majority accepts the current lockdown and sanctions in evil sadism the few doubters by denouncing them to the authorities is the greatest and at the same time the most depressing proof for my thesis which I would have gladly missed.

I have spent the best years of my life, almost a quarter of a century, under a similar, most brutal communist lockdown and would have never expected in my worst nightmares that I would ever experience even a worse situation at the end of my last physical life – being locked down in the country that has brought the Renaissance and all the progress to modern humanity – Italy. And the Italians behave even as worse “codardi” (cowards, dastards) than my countrymen have ever been. I thought that the Bulgarians were the world champions under doping in this most popular discipline of human cowardice on this planet, but the Italians are beating them nowadays at great length. And their denouncing rage is no less expressed than at the time of the ubiquitous communist spies and ideological control – the Orwellian brave new world 1984 on fascist steroids.

Only cosmic humor can prevent us from succumbing to this gloom and doom:

I have sufficiently explained the dialectical nature of the current quarantine in my previous articles on this topic. It serves our ascension and it helps us expose the cabal and their infinite lies in order to abolish once and for all the old matrix – first and foremost, the fake and lethal medical healthcare as science and as a healing system.

Then, at the same time, we will expose the heinousness of the ruling cabal who teamed up with the dark scientific obfuscators, the Faucists (Dr. Fauci) and the Nazis, those who “ausmerkeln” (play upon words, Merkel with “ausmergeln” which means in German to starve people to death as in the Nazi concentration camps) the people to the playbook of the cabals’ Eugenics – to cull humanity and eventually establish the NWO. Please, do not forget that this is all done with the only goal – to prevent the ascension of humanity and Gaia against our decision at the soul level and as a divine dispensation of the Godhead. This is a futile effort but these dark imbeciles will never learn. Hence their defeat and demise are certain.

It has already begun…

While the cabal has difficulties to preserve the current lockdown of humanity under false pretexts, it stares in a panic at how their plans to enslave humanity are going down the drain with each day when truth embraces relentlessly the once scared ego-minds of the masses.

Fake science and fudged epidemiological statistics cannot help the dark cabal anymore to preserve their power as more and more scientists and even politicians see the obvious fraud or are clever enough to distance themselves from this scam in fear of future persecutions that will inevitably follow in their 3D reality when all the lies are revealed. These revelations will begin with me as an ascended master and a medical expert of higher dimensional thinking and then supported and flanked by all the other honest doctors and experts who are already raising their voice and condemning the current scam with the coronavirus epidemic.

The good news is that the truth can no longer be hidden also by the chief medical experts and cabal stooges in the western countries who are now resorting to a desperate flight into veritable schizophrenia of fear-mongering statements and half-truths that completely offset their lies. Only if the dumbed-down humanity finally awakens and sees that the Emperor is naked.

Watch this video how the UK chief medic confirms that COVID-19 (this virus actually does not exist but is a code name for identification chips in future vaccinations) is harmless to the vast majority of humans as I already wrote in February two weeks before the lockdown of the Western world began with Italy. Boris Johnson, who already had this virus but attributed his hospitalization to his obesity and not to the alleged viral disease, was also present at this press conference and had to agree, willy-nilly, with his chief medical adviser. Why is he then still holding onto this deadly lockdown? – read all my articles on the ascension scenario to find the answer as the other writers still do not get it: 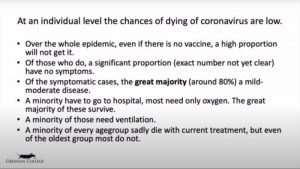 and as a text:

[T]he great majority of people will not die from this and I’ll just repeat something I said right at the beginning because I think it’s worth reinforcing:

Most people, a significant proportion of people, will not get this virus at all, at any point of the epidemic which is going to go on for a long period of time.

Of those who do, some of them will get the virus without even knowing it, they will have the virus with no symptoms at all, asymptomatic carriage, and we know that happens.

An unfortunate minority will have to go as far as hospital, but the majority of those will just need oxygen and will then leave hospital.

And then a minority of those will end up having to go to severe end critical care and some of those sadly will die.

But that’s a minority, it’s 1% or possibly even less than 1% overall (from those going to the hospital who are much less than 1% from those who carry the virus and either have no symptoms or very mild symptoms for a few days (see above), so that the actual mortality of this virus is 0.01% t0 0.001% for all allegedly infected people; actually the coronavirus family is endemic in the human population as the flu viruses and have never caused any harm since we know this group of viruses in 1960.)

And even in the highest risk group this is significantly less than 20%, ie. the great majority of people, even the very highest groups (understand the oldest patients, older than 80 years, who all die eventually from something. Please, observe that according to the current criteria of the WHO for this endemic, any patient who dies with suspicion of coronavirus infection, even without any test, is now being considered as having died from this virus and enters the fudged statistics of the cabal and their medical stooges. Read all the articles on this scandalous aspect of the current scamdemic,e.g. here), if they catch this virus, will not die. (Where is the danger then as to rectify this global lockdown that brings poverty and misery to hundreds of millions of people?)

And I really wanted to make that point really clearly… “Did you really?!”

Why then the lockdown of the world population if it is such a harmless virus? I am the only one who gives the full and only logical answer and explains the causal relationship between the most criminal attempt of the dark ruling cabal to enslave humanity and our imminent ascension and the appearance of the city of light in Italy, about which the cabal know very well from my website.  And contrary to the agnostic slumbering masses, they know that it is true. Which explains the total shock the masses will experience very soon…

This presentation tells you one more time why this scam has to be abolished with one fell swoop by ourselves while the quarantine is still ongoing and the memory of the people, which usually has a shorter span than that of a goldfish, is still fresh and the scare sits deep in their bone marrow. We are the only ones who know the whole truth and have also the answer for all the problems of humanity, which can be reduced to two major areas  – health and prosperity – as we wrote on our crowdfunding website for the new Healing and Study Centre of the Universal Law in Italy while being inspired by the Source:

“Dr Stankov brings forth new ideas and theories from a higher level of awareness for the sole purpose to assist humanity in learning new ways of expanding into a more socially supportive world.  This new supportive world will reflect two fundamental social innovations:  First, every human being experiences optimal health and secondly, every human being experiences personal prosperity. “

But before we can bring health and prosperity to humanity, we must expose all the major lies that determine life on this planet and are still shared by the vast majority of the people. The biggest lie of all is that current science is trustworthy – it is not, it is entirely fake science and this is particularly true for medicine and all the bio-sciences. Of course, it is also true for the entire physics which is considered the most exact natural science. False medical ideas are currently misused as rectification for the lockdown that was supposed to end up in the NWO unless we ascend in the coming days and stop this insanity as Divine Intervention. The cabal has been planning this lockdown for a very long time:

With that, the itinerary of the ascension process in the coming days is clearly outlined. Enjoy the ride!