Europe and China Enter Bear Market. Emerging Markets Slump to the Lowest Since 2009

Brad let the bears loose with his latest article “The Safety Dance“. Not only are the US stock markets breaking through the support levels today after a modest correction yesterday, but what is more important, the two world major markets which vastly contributed to the world economy in the last years – Europe and China – have entered a bear market today. If it walks like a bear, growls like a bear…. then it is indeed a bear.

The US equity markets are following suit with 13% losses for S&P 500 and DJ and 15% losses for NASDAQ from their highest values in 2015. At the same time the emerging markets have slumped to their lowest value since 2009. The carnage is all over the place now and there is nothing that can stop it. 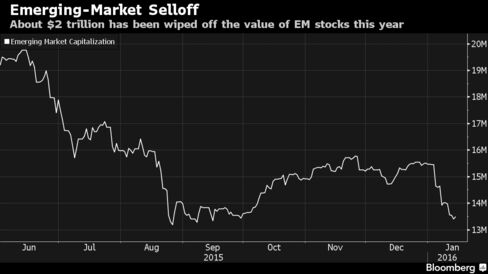 My prediction is that next the real estate market will crash. It is the only market of some real value that keeps the western economies from falling apart. The other market of real value is the commodities market and it has slumped to its lowest level in the last 35 years and the end of the rout is yet to come. The collapse of the Orion economy is now in full sway and it is a matter of days when even the megalomaniac cretin Obama will finally get it – the real state of the American economy.

The transliminal souls are now pedaling to the metal as they want to leave this reality as quickly as we do. For the first time in the history of this planet a large number of incarnated souls want to ascend and have not opted to go down the archon spiral of total enslavement. We have entered the most exciting time in the history of mankind – the time I have envisioned and predicted almost two decades ago and now finally this vision is becoming reality. The prophet is redeemed.