One does not need to study Canada’s national statistics to notice immediately that this country is bankrupt – the government, the corporations and all the citizens. You can see it everywhere, in the exorbitant unemployment among young people, in the lack of any producing industry, in the omnipresent overhead of tertiary service businesses that do not make any economic sense. It is a real conundrum as to how this country generates its national wealth. Surely not from investing in real estate by building Potemkin’s houses with cheap gyprock (plasterboard) that rotten with black mould a few years after construction.

The notion that this second biggest country in the world in terms of territory is a kind of heaven amidst constantly growing poverty worldwide, as can be amply observed over the border in the USA, but also increasingly in Europe, is one of the typical myths that are so stubbornly held alive by all kinds of human zombies, many of them citizens of this country. Sancta simplicitas!

I have written on many occasions about the huge private, corporate and state debt of Canada and how palpable it is in everyday’s life. People are living here from paycheck to paycheck and many of them virtually starve, till they get the next paycheck, already more than halved by a plethora of obscure taxes. It is a real Orwellian society, even for somebody who comes from Orion Europe, where the Big Brother is already an omnipresent reality.

And how blind must one be to believe that Canada is a paradise, when this country follows the footsteps of the Empire of Evil in every conceivable military conflict and is now preparing, as winter comes to a close, to spend billions on new military equipment to support operations in the country’s inhospitable Arctic regions. With borrowed money the Harper’s  government does not have and cannot pay back as it is drowning in its national debt as all Canadians in their private debts.

In the 1980’s, Canada was governed by, at that time, the most incompetent, fiscally irresponsible regime in the Western world: Brian Mulroney’s “conservative” government. In a mere eight years Canada’s national debt tripled and its debt-to-GDP ratio soared to what was at the time an astronomical level above 70%. At that time Canada was already considered to be in an official “debt crisis”.

Canada’s debt-crisis of the 1980’s led to a new, fiscally responsible government taking power: Jean Chretien’s liberal government. Its harsh fiscal management produced a full decade of budget surpluses, where the debt-to-GDP ratio was roughly cut in half. It was an example of successful “austerity”, the only such success, anywhere in the Western world over the past quarter of a century. It was successful precisely because Canada had not yet passed that economic point-of-no-return, where the interests from a gargantuan national debt can no longer be repaid.

Fast forward to current times: Canada’s current conservative regime, the woefully incompetent and criminally irresponsible government of Stephen Harper has eliminated all previous debt-reduction and Canada’s debt-to-GDP ratio has exploded to a level more than three times higher than the “debt-crisis” created by the last conservative regime. This debt is only comparable to the “negative debt record” of Obama’s regime, who almost doubled the US national debt from 10 trillion when he came to power to almost 20 trillion by the end of this year, in case humanity will experience this date, which is highly doubtful.

Canada’s debt-to-GDP level has now skyrocketed to more than 220%. It is not simply way past the economic point-of-no-return, which is mere insolvency. This nation is outright bankrupt – in blatant economic and fiscal terms. Continuing to service this obviously unsustainable debt is nothing more than economic sadism, perpetrated by Stephen Harper against the people. Canada has become one huge Greece without the warm Mediterranean islands and the cheap ouzo, where even the 90% state taxes on all liqueurs, being four to five times more expensive than in Germany and only proportional to the rates of clandestine alcoholism in Canada, cannot help repay this gargantuan national debt.

For many decades the policy of “extend and pretend” has been the unofficial mantra of the entire U.S. economy over the border. Roll-over the corporate debt, roll-over the municipal debt, roll-over the state debt, despite the fact that most of them are unsustainable. And roll-over the gigantic debts and obligations of the U.S.’s federal government, despite the fact that its $100+ TRILLION in debt/liabilities is roughly ten times greater than what can be sustained by this crippled economy. Canada now fully follows the example of the Empire of Evil. 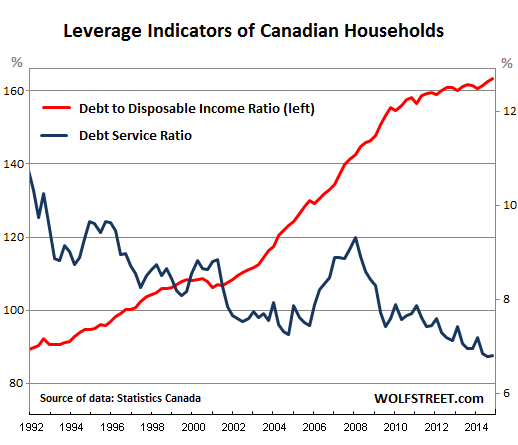 The ratio of debt to disposable income picked up speed from 2001 on. It blew through the financial crisis even as US households were whittling down their debt by deleveraging and defaulting. Canadian households didn’t even stop to breathe. They kept spending and piled on debt at an astounding rate. Their incomes rose also, but not nearly enough. It wasn’t until 2011 that the red-hot growth rate started to lose some of its fire, bumping into all sorts of resistance from reality.

The reality with an entire national economy based upon “extend and pretend” policy is that it has no future. The economic suicide continues on and on and on until… total economic implosion occurs. It begs the question: why wait? Why inflict more and more damage on the own economy, when any politician capable of operating a calculator knows that the only, possible short-term outcome is national bankruptcy?

What is the colloquial definition of “insanity”? Repeating a past failed policy, but expecting a different outcome. What is the definition of economic treason? Continuing to pursue the same, failed economic policies year after year, despite their self-destructive consequences, but pretending that repeating this failure will lead to a different outcome. This is what we now observe in Canada, in the Empire of Evil south of it and also in the entire EU, where even the power house of Germany and EU paymaster has a debt-to-GDP ratio of 188%.

There are now more than 40 western countries with debt-to-GDP ratio of more than 200% and some of them more than 300% debt, which is even worse than that of Greece. The fact though that no Western government other than Greece’s new government has acknowledged its own, obvious insolvency and takes concrete steps to resolve these gargantuan debts is prima facie proof that none of these regimes are legitimate. They represent not their own peoples, but the banksters who are continuing to rape the people for interest payments on these ridiculously excessive and unsustainable debts as they did with the Greek people and caused hundreds of thousands of human deaths in the last five years of savage austerity. This is genocide on humanity perpetrated by the One Orion bank and its puppet regimes in the West and that is why they must and will go for ever – at the latest this spring.

Housing Construction Skids in Canada, but Crashes in the Oil Patch