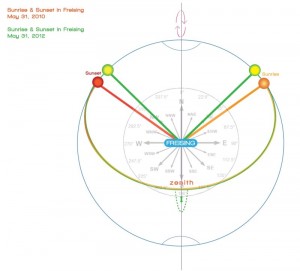 Graphic: Monica Marulanda (Click on the graphic to enlarge it)

I am observing the path of the sun very closely since the beginning of this year and I noticed many notable anomalies that must have been registered by any decent astronomer or observatory on this planet and subsequently made public. These anomalies are caused by the powerful magnetic impact, which the  Anunnaki’s  vagabond planet Nibiru (Planet X) exerts on the earth’s magnetic field and causes the earth to wobble around its axis.

The effect of Nibiru on the magnetic earth’s field was so strong and pronounced in the last several weeks and months that NASA was compelled to close its website with the simulator of earth’s magnetic fieldlines, as this model proved beyond any doubt the existence and approaching of the Anunnaki’s planet. This website was very popular among many light workers and critical users of the Internet and was widely used as a proof for the Nibiru’s effect that will soon play the role of a catalyst for the magnetic pole reversal.

Since the end of May, Nibiru is visible again as shown on pictures made by scientists in the Antarctic and published in our ascension report as video. In this context I also mentioned my personal observations on the anomalies of the sun’s trajectory, and Monica Marulanda was very helpful in drafting a graphic of the sun’s orbit for the end of May in comparison to the sun’s orbit two years ago, for which I am very thankful to her. She used data from the following official astronomic website

and has also considered the data from my personal astronomic observations of the sun. These observations have been confirmed by other members of the PAT at different sites in North America for the sun’s orbit in the Northern hemisphere. I am publishing a sample of their observations below as further confirmation that the increasing wobbling of the earth due to the Nibiru’s effect must be obvious to everybody and can be observed with a naked eye.

Observations on the anomalies of the sun’s trajectory by PAT members:

“Tonight (June 3, 2012), no red in the sky whatsoever and the sun is so far over North, at least 30 degrees, that our backyard that once enjoyed the last rays of the sun, is no longer. Everything has been pulled to the South (Earth) and no matter how much I watched, there was no red twilight. Due to foliage, I don’t have a clear view of the horizon, but it seemed that the sun was hovering towards the horizon and then just gone, vanished. My bedroom window that faces west used to enjoy the setting rays of the sun as well, but no longer. There is a huge tree that has V’ed off in two major trunks, and early summer, late spring, every year, the sun would slowly sink right between the two trunks. Again, no longer.”

“Last week (May 28 – June 3) we had a perfect day here in Southern Ontario to watch the sunset at 8:45 pm local. I was right here (you can paste them into google maps)

And the sun was way more northwards than westward, by a huge amount.  I have no idea how that goes unrecognized in the community of astronomy and such.

I was watching this from the shore of lake Ontario and could look clear of me about 25km north, east and west.

As the sun set it was changing shape – it the weirdest thing was, it didn’t seem to be from the lake or the clouds, it was probably the horizontal movement effect you mention in today’s post. I couldn’t actually see horizontal movement, but the changing shape ( id call it oblique, like an egg on its side ). Maybe this shape distortion before sunset is normal, I have no clue.

The other weird thing I notice is my recent poor ability to follow my inner compass. Normally I can be dam accurate, going anywhere without a map even. But recently, I have a lot of trouble.

I know this type of things screws up insects (one of your readers mentioned odd behaviour of bees last week)”.

WOW! !! If you could see me I would be jumping up and down! Sunrise this morning (June 6, 2012) was in the NE sector of the sky. Normally it is straight east and comes in our window in the morning. Last night and the night before the sun set in the NW sector of the sky.

These observations on the anomalies of the sun’s trajectory as registered very easily by the site of sunset and sunrise were additionally verified by a new frenzy of the dark ones to cover the sky with chemtrails and thus to hinder the observation of the sun and eventually other Nibiru’s effects.

Many more readers of this website confirmed in the last days that after a relative pause in May, the intensity of spraying chemtrails has significantly jumped in the USA since the beginning of June. I can also confirm this for Germany, which is altogether less affected by chemtrail activities than some other countries. Other members of the PAT observed similar increase in chemtrail activity in other parts of Europe, such as Italy and Holland.

This is the overall picture. The astronomic facts for the coming of Nibiru are easily accessible on the Internet and can be confirmed by personal observations anytime. They tell us more than all the pseudo-scientific data which the astronomic establishment is releasing these days. The cover-up of the dark Elite has become so grotesque, that it is really a conundrum why the overwhelming majority of the people is still sleeping and there is no mass outcry against these machinations of the dark ones.

I am fully confident that this cover-up cannot last for very long and I that it will end this month. Until then, such anecdotal observations as have been done by the members of the PAT contribute to the awakening of the masses, even though none of us is a professional astronomer. When laymen have to fulfil the duty of paid, professional astronomers, then everything must have gone wrong on this planet. The coming of the big events this month will finally bring the truth to the people, even if some may decide still to negate it.

This entry was posted in Other Articles and tagged anomalies of the sun's trajectory, cover-up of the dark elite of astronomic facts, earth's wobbling, high chemtail activity in June, magnetic impact of Nibiru on earth, magnetic pole reversal, NASA simulator of earth's magnetic lines stopped, Nibiru (Planet X), observations of PAT members of anomalies of the sun's orbit. Bookmark the permalink.