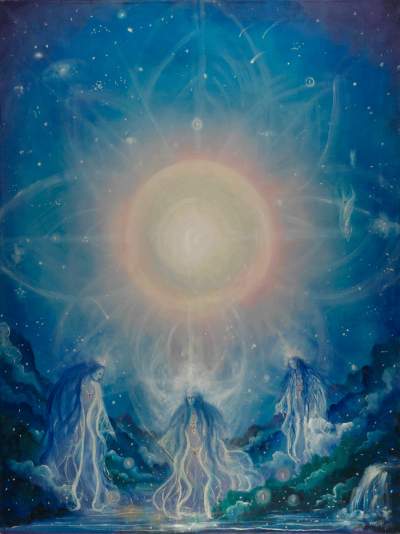 Here is the audio from CA’s radio talk. I am just about to sit and listen, so I don’t know what’s in it.

I have just heard the CA interview in RMN, and out of the two and half hours, there are only 5 minutes that are worth hearing, but these are a real sensation – between the 1,45 and 2.00 hour period.

Essentially, CA changes his scenario for the End TImes and now speaks that there will be three earths – earth B, where the dark ones will fully dominate, earth A, which will be the ascended earth to the 5th dimension as previously announced, and a new third scenario – earth A/B, where “there will be dualism in harmony” and where the dark ones will have no domination over the enlightened entities, but where the last ones will not be so spiritual as the current spearhead of the star seeds, so that this part of humanity will continue living in a metamorphic state. CA compares it to the current day with 12 hours sun light and 12 hours night, but with no dominance from both sides.

If this is true, and I have to read the transcript carefully one more time when it is published, then the introduction of this new third earth A/B  must be the decision that was made on February 26th, as it has huge repercussions on all scenarios for the current End Times. In this case, the split of the timelines can come earlier than planned for us, as I have always favoured and expressed in my writings.

We will now ascend in smaller numbers than originally planned to the 5th dimension. But this decision also makes it possible for Heaven to carry out a clean split of the two timelines, as the new third earth A/B will be now the new basket that will harbour all the still sleeping entities, without us being responsible for them any more, as they have not made it on their way to planetary ascension and will have to repeat the ascension class.

These human entities will probably stay for some time, I assume for the next two thousand years, in this amorphous earth, based on a parity between good and evil and will only then be given the next chance to ascend.

I have discussed in my previous writings that there was a similar scenario when Jesus appeared two thousand years ago. At that time, it was planned that a small group of very old souls would ascend collectively and help humanity evade the Dark Ages of Christianity, but then the mission of Jesus failed from an energetic point of view, as the threshold of ascended masters could not be reached.The Orion/Reptilian empire could sabotage this divine plan and Jesus ascended alone.The disappointment of the remaining potential ascended masters is documented in the New Testament in the letters of St. Paul to the first Christian communities in Greece, as I have written extensively in my gnostic books.

Now we have a kind of a repetition of this scenario, but this time for the large group of the young and adult souls, many of which will not be able to ascend to the New Earth at the 5th dimension. It is awesome how the pieces of this mosaic that has bothered us for the last four months since 11.11.11 now come together and fit, and why we did not get all the information from our higher selves before. It was a huge cosmic poker play and the outcome was on the edge. Now the dices have fallen, and we are heading home with less ballast. It is a mixed baggage from a cosmic point of view, but we have done our best, then without us nothing would have ever happened on the earth and the ascension of this toxic planet would not have taken place.

This all coalesces fully with my perception for the last two years as documented in many publications on this website, namely, that humanity is in a huge retard and may not make it on the way to ascension as originally planned. I have always reiterated that this End Times scenario is not a masterpiece, and now we have the final admission from Heaven that this is in fact the case, and this admission has led to the creating of a third scenario – earth A/B.

This fact also explains the great pressure, under which we all had to live in the last four months, after the partial opening of the stargate 11.11.11. as our goal was to heave the light quotient in as much still sleeping entities as possible.and help them ascend to the 5th dimension. Now we are relieved from this heavy burden and we will only care for the really awakened, who are a much smaller portion of humanity than initially targeted and thus much more easily to coach. The relief we all have started to experience since the beginning of March is, among others, due to this ultimate decision on February 26, which we all know at the level of our higher selves.

Thus, we have all the pieces of the current cosmic puzzle that fit together. The most deplorable fact is that the woman who interviewed CA on RMN is such a stupid goose, that she did not notice this dramatic change in the End Time scenario as advocated by the CA for the last four years and did not ask additional questions to clear the matter, and CA of course did not elaborate on this issue, according to the motto: “Who has ears, should listen!”

This most important information could have been lost in the crap that was presented in the rest 2 hours and 25 minutes during the interview, if I did not have listened so carefully what CA has to say. Otherwise this sensational news would have, most probably, not come to the surface. Now we need further confirmation for this scenario.

But this latest information of CA backs fully all my previous predictions and assessments  that there will be an earlier ascension than planned in Dec 2012 for the most evolved human entities, even at the expense of the rest of humanity.

This was the reason why I have repeatedly advised you, the members of the PAT, not to sacrifice yourselves and save other sleeping human entities, as they cannot be saved, but that you may instead jeopardize your own ascension process, if they drag you down in their lower frequencies. There has always been a real danger to compromise one’s own ascension and hence the wise decision to have three earths now. And make sure to keep it in your mind: You were the ones, who decisively contributed to this decision at the level of your higher selves. But the assessment for this decision was made on the ground by all of us, while exchanging our opinions on the state-of-ascension on this website.

Heaven has now definitely given up its initial plan to ascend half of humanity to the 5th dimension. Now the harvest will be at best one third to one quarter of the total human population that will be able to ascend to the New Earth A, and this could happen anytime in the course of this year, most probably in the first half of it.

We are indeed heading to some sensations, notwithstanding the fact that the whole End Time scenario is not a masterpiece. This was my invariant motif in all my writings since 11.11.11 and now I have the ultimate confirmation.

The bad news for humanity is the good news for us, the members of the PAT.

We will now need some time to digest this information and I hope that the cretins from the CAC will finally start thinking in a proper logical manner and take this interpretation from me as a guideline and start asking the proper questions to CA as to get the right answers and not chew their old crap since 1960. In this way the only thing they will achieve is to stay in the interim planet A/B and the whole channeling of CA has been in vain for this group.

With love and light
George